Around A Young Adult

He is an amusement park entertainer who has a secret crush on the girl playing the princess in the parade. However, he struggles to confess his romantic feelings towards the princess.

Attilio is a man with fair skin, light green hair, blue eyes and orange eyeshadow. His clown outfit is striped white and magenta with dark magenta pants that become his shoes. He wears yellow gloves and his shoes bear yellow soles and puffballs.

Attilio is a funny man who loves being a clown at the amusement park. When he meets Cass Milligan playing Princess Merry in the parade, he falls in love with her. However, he becomes very nervous that she will reject his love feelings, causing him to be corrupted. In the end, Attilio calms down and gathers the strength and courage to confess his love feelings to Cass. She accepts him and he joins her on the float in the parade. 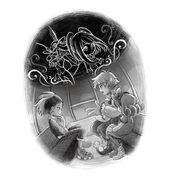 Leo, Attilio, and Cass discussing their visions of Balan and Emma. 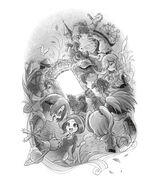 The inhabitants- including Attilio- all preparing to leave Wonderworld. 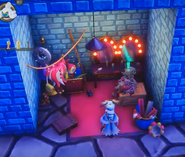 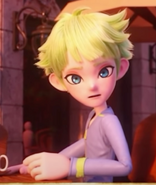