Bulldozer (ブルドーザー, Burudōzā) is one out of the eighty unique Costumes found in Balan Wonderworld. It appears in Chapter 11.

Bulldozer allows the wearer (Leo or Emma) to push special yellow and black construction blocks usually to open up new paths or to use as a platform.

Bulldozer is a bulldog construction robot. Its construction arm is yellow, gray, and black. Its shoes have tank rollers at the bottom and there are bolts on the top and middle of its armor. 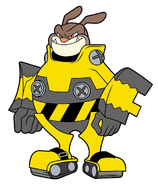