“The Boy Who Would be One with the Wind”

The story of a boy who yearns for the open sky.

Chapter 4 (風になりたい少年, Kazeninaritai shōnen) is the fourth Chapter in Balan Wonderworld. Its inhabitant is Haoyu Chang.

Chapter 4's theme revolves around the sky and the aspect of wind based on Haoyu Chang's desires to fly in the air. There are many floating land formations in the sky with bright green grass and light gray rocks. There are numerous contraptions, platforms, buildings, wooden planks, and windmills found in the Acts representing machinery and construction. There are large fans and balloons made for specific costumes (Soaring Sheep and Aero Acrobat respectively.) On the grass, pinwheel flowers can be spotted.

in Chapter 4's Act 1, 2, and 3, there is a large moving island in the shape of a whale called Cetacean Island of which Act 2's goal is located on.

Below are all the Acts of Chapter 4. The Boss Act links to Worville Wright:

There are six costumes found in Chapter 4:

Worville Wright is the Nega Boss corruption of Chang's heart.

The specific page for all music is here. 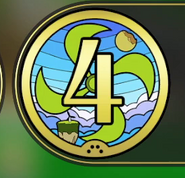