Guardian Bird (ガーディアンバード, Gādianbādo) is one out of the eighty unique Costumes found in Balan Wonderworld. It appears in Chapter 5.

Guardian Bird allows the wearer (Leo or Emma) to stir up wind when preforming a mid-jump to attack enemies and repel tornados.

Guardian Bird is an anthropomorphic parrot-like bird representative of the inhabitant Sana Hudson. It mainly has cream yellow feathers, with dark purple feathers on its head and tail feathers. There is dark purple on its hands and talons as well. Yellow, orange, and green also appear throughout its body. And it wears a colorful light green top. Its head and tail feathers are stylized like dreadlocks, with orange and yellow tips. It also has light green eyeshadow and an orange border separating the head and hair. 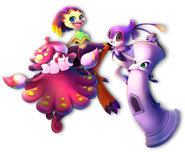