White
Happy Blaster is one out of the eighty unique Costumes found in Balan Wonderworld. It appears in Chapter 9.

Happy Blaster allows the wearer (Leo or Emma) to explode and damage enemies using the action button. And can also protect the wearer from bombs.

Happy Blaster is a balloon clown representative of the inhabitant Attillo Caccini. It is red and white throughout with yellow on its hat, shoes, gloves, and cheeks. Its hat ends with a balloon end. Its outfit includes a clown dress with a ruff and gloves. 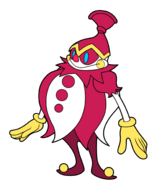