"Lance traps visitors to Wonderworld within their own hearts, to create monsters out of negativity."

Lance is a character that appears as the main antagonist in Balan Wonderworld.

Regular Form - Lance is a tall, thin figure with elf-like pointy ears and black, tendril like hair with rainbow markings (Negati patterns/markings) around each one. He also has similar looking tendrils protruding from his back. He wears a dark violet tight-fitting jumpsuit with a long-sleeved purple sweater. He also wears yellow shoes which are covered in rust. A pair of white masks resembling the ones Negati often wear are located on his hips, and he has frayed black and pink cuffs. His forehead is covered with pink markings with the center marking resembling a heart. He has thick black eye shadow and a white lower face with a single black marked tear. Lance has blue eyes and yellow sclera, and usually is shown frowning. His legs also have a similar rainbow pattern to the tendrils coming from his back.

True Form (In-Game) - However, this is not his true form. His true form, which is revealed at the end of his boss fight, is mostly the same as his false form, except that his outfit is mostly white with blue, silver and pink hues. Instead of tendril-like hair, Lance now has pure white waist length hair and no tendrils protruding from his back. He still has blue eyes, but he now lacks yellow sclera instead having white sclera. He also lacks his false form's pointy ears instead either having human-like ears that are hidden by his hair, or no ears at all. He also no longer has the Negati-like masks by his hips.

True Form (Novel) - The novel version of his true form bears a few differences to his in-game version. Rather than a diamond symbol on the end of his white sweater, he bears the same gold marking that his false form does. The cuffs are more frayed and are black and pink rather than gold and bluish purple, much like his false form's cuffs. He also has gold lining along his hips and legs. His shoes are also completely purple, rather than bluish purple and magenta. It appears that this form may be a mixture of his true and false forms.

While he doesn't appear in the game's intro, he is seen in every chapter summoning enemies and blocking paths to prevent Emma Cole and Leo Craig from progressing. In Chapter 1's Boss Act's cutscene, Lance Appears, we see him corrupt Jose Gallard's heart (although the cutscene doesn't have unique variants for the other inhabitants in-game, it does explain how the other Inhabitants were corrupted from the very beginning). In the last level of the game, Balan asks if Emma Cole or Leo Craig are ready to trust in their friends before leaving. Several Negati appear along with Lance. Much to his humiliation he tells Emma Cole or Leo Craig to leave or be gone. A flashback plays showing their sadness and negatives before Lance challenges them to a battle (and you know what they say, if there is something you want done right, you have to do it yourself). After defeating him once, he starts to lose it, combining with his Negati minions and transforming into a gigantic beast, but thankfully Emma Cole or Leo Craig's friends arrive and help them stop Lance. After defeating him again, he is restored to his true positive form. Emma Cole and Leo Craig are surprised to find that he was corrupted by Negativity a long time ago, resulting in his false, negative form which he assumed for the majority of the game. However, before he could do anything, several Negati appear and drag him back into Negativity (His demise or fate is currently unknown).

Lance has many abilities related to negativity and the Negati. Both in-game and in the novel, we can see that Lance can corrupt an inhabitant by touching them. In game it was with one of the tendrils from his back, and in the novel he does it by touching a finger to their forehead, so we can assume that this power works through touch. This makes the inhabitant turn into a Nega Boss. He can also summon Negati with a snap of his fingers.

In Balan's Bout, he fights Balan and is easily defeated if the player taps the button in a quick time event with the right timing. He also has abilities similar to Balan's, where we see him summon a bright pink orb of negativity (rather than Balan's yellow orbs or positivity) and throw it at Balan. He can also create dark portals he can travel through, appearing seemingly out of nowhere. More of his abilities can be seen in his boss fight.

After collecting 110 Gold Balan Statues, and defeating all of Balan Wonderworld's Nega Bosses, you can fight Lance in a boss battle. Note: His boss fight does not offer any Costume Cubes/Crystals and Keys, though Costumes are provided by the Inhabitants during Phase 3. If you lose during the boss fight, you'll have to start again back at Phase 1.

Phase 1: One of Lance's attacks is splitting into five. The player can attack the real one as the copies charge at the player in a random order. Lance will also shoot 18 blasts at the player, locking onto their current position. These blasts leave behind poison areas (possibly of negativity) that can hurt you if touched. Lance will then summon Negati (First Guraguras, then Bangbangs when he has been hit two times already) before sending in a tentacle from underneath the player and then appearing top of it to make it spin around, this tentacle can also harm nearby Negati. The player can take the opportunity to strike him again while this happens. If you lose all of your Costumes, Lance with end the boss fight by unleashing a big energy ball. (You'll be taken back to the Isle of Tims.)

Tip: The Costume, Jolt Tiger, is recommended, as it can attack Lance without having to jump and avoid the other copies.

Phase 2: Lance battles the player in his giant beast form. He slams his fists into the ground, creating two shock waves that the player jumps over. After this, he charges up a beam that engulfs the entire battlefield, ending the fight. (You can skip to the ending cutscene by simply walking off the area until you have no available Costumes, and/or purposely letting yourself get hit.) This is also the shortest of the three Phases.

Phase 3: Lance will slam one of his fists into the ground to create shock waves. During this, the player can use one of his/her air time costumes to strike one of his cores. Lance will fire flames from his hands, one of which has a Negati mask on it. The player can hit the one with the mask over to Lance, destroying another core. Lance will make some of the battlefield disappear (PSA Warning: In the un-patched version of Balan Wonderworld, while Lance does this, white flashing can occur, which can be trigger epilepsy for those with it). After which, he will summon current blocks for the Dynamic Dolphin costume. Alternatively, the player can use the other two costumes to reach and destroy another core. For his fourth attack, Lance will launch giant tornadoes, which the player can deflect using the costumes used during this event. Only 3/4 cores need to be destroyed before moving onto the final part of the phase, which sees Lance firing the laser he used in the last phase. Only this time, he moves it to where the player is, leaving trails that can hurt you behind. After this, Lance's last core is destroyed and he collapses onto the stage. The player can walk across the beast's tentacles, over to its head, attacking its core and ending the fight. (Note: The time to hit its core is limited. If you fail to make it in time, the stage explodes and you'll be sent back to the Isle of Tims.) If you lose all the Costumes you currently have, Lance will use a laser to make poison areas, the player character then faints, and you'll be taken back to the Isle of Tims. (Though, the lasers are the same as the lasers used when you almost beat him and collapses.)

To climb on to him, go to his left tentacle, go on his back, and jump on to the core. Tornado Wolf, or another Costume that can jump on the core is recommended. 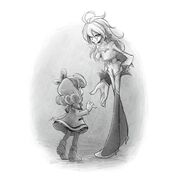 Lance in his humanoid form greeting Cass in the novel. 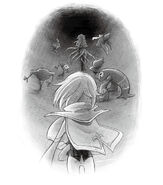 A hatless Balan watches as Lance walks off into Wonderworld.

Concept art of Lance. In it we can see a concept for Shadow Lance (far right), a Lance that appears more similar to Balan in appearance (top left) as well as a closer look at the design on his chest, a concept design of his face (bottom left), another concept design for Lance (bottom middle), and possibly a concept for a scrapped scene with Lance (top middle).