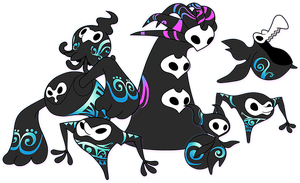 Negati are the main enemies in Balan Wonderworld. They are summoned by Lance and come in different shapes/forms.

A majority of Negati enemies and all of the mid-bosses can be red in Hard Mode, and blue in Easy Mode (more information here.) Mid-bosses have a chance to have a Lanced form during Hard Mode. The difficulty of the Nega Bosses also changes between Hard and Easy Mode, mostly affecting speed.

Negati can be found in every Act, except for all Boss Acts excluding Lance's.

Every Negati enemy (and Mid-Boss) can be beat by simply jumping on it. If you do a bunch of jumps/attacks in a short amount of time, you can trigger a combo mode to obtain more Yellow Drops when the Negati are defeated. You can use almost any Costume to defeat Negati. Direct contact with Negati enemies don't harm you, but can knock you back. You can only get hurt if the Negati enemy attacks first, or if you come in contact with a Negati with spikes.

Strategies for Negati Enemies, Mid-Bosses and Nega Bosses can be found on their respective pages.

Note: The names of the Negati enemies listed were taken from the game's internal filenames, except for Ghostli.

Enemies that only appear in a specific circumstance, and do not have a red (hard mode) or blue (easy mode) variant. Often used as enemies that are needed to beat to obtain Statues.

Officially called Negate-guarding Negati, they are mid-bosses found in the middle of a 2nd Act. Defeating them allows you to progress pass the Negate.

Nega Bosses are the corruptions of the different inhabitants in-game. You must defeat all of them to fight Lance.

Wisp-like Negati can be seen in Lance's boss fight (Boss Act,) not to be confused with the masked projectile in the third round, they all have the masks of the four mid-bosses and a wispy body that can fly. They are seen to take Lance into a purple portal.

A Negati-masked projectile can be hit to attack Lance during the third act of his boss fight. It has the same body as the wisp-like Negati.

Dokadokas used as self-activating bombs can be seen in Hooverton's boss fight. They are larger than regular ones, and instantly explode when on the ground. They also have no legs.