Pounding Duck (パウンディングダック) is one out of the eighty unique Costumes found in Balan Wonderworld. It appears in Chapter 6.

Pounding Duck allows the wearer (Leo or Emma) to preform a ground pound after jumping using the action button midair. It emits a shockwave after ground pounding.

Pounding Duck is a elegant duck wearing formal clothing. It has white feathers and pink hair. Its outfit consists of a purple flower hat with a yellow flower, a pink tuft, a dress with a blue and yellow diamond pattern along with a single pink diamond and a darker bottom, and purple high heels with the heels being more darker than the front part of its shoes. It also wears pink eye shadow. 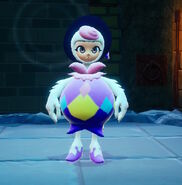