Corruption of Who's Heart?

(Based Off A Cat)

Blue to Purple, Orange to Yellow

Purrla (ファットキャット, Fatto Kyatto?, "Fat Cat") is a boss in Chapter 6 of Balan Wonderworld created by Lance to prevent Emma Cole and Leo Craig from progressing.

Purrla lurks in the depths of the world born from Cass’s heart, embodying Cass’s warped emotions. Purrla can attack with a rocket punch, as well as control time with the clock on her stomach.

Method 1: Punch the traffic lights she stands on with Pumpkin Puncher and then strike her clock.

Method 2: Punch one of the flying fists and then her clock.

Method 3: Switch to Chrono Bunny to negate the timeslow from her rage attack, then jump on the blocks to strike her clock.

Purrla is composed of the following combination of costumes: Air Cat, Pumpkin Puncher, Pounding Duck, and Chrono Bunny. She is the corruption of Cass's heart.

Purrla is a round, happy-go-lucky purple cat with a big clock located on her body. Her clock and the golden lined decorations are colorful among with colored triangles. Her hands are detached from her body. And she had black bows on her feet. 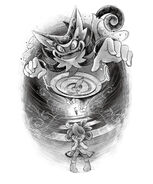