Speed Boost After Charging Up Ability

Super Skater (スーパースケーター, Sūpāsukētā) is one out of the eighty unique Costumes found in Balan Wonderworld. It appears in Chapter 1.

Super Skater allows the wearer (Leo or Emma) to go at a fast speed after charging its ability with the action button.

Super Skater as a creature is not shown officially, though it appears as a humanoid wearing a pink and blue skating outfit. Its outfit includes a helmet, top, pants that go into roller-blades, and plates covering the lower sections of the arms.

The Super Skater costume is found in Chapter 1, Act 3, which is only unlocked after defeating the final boss. To collect this costume, the player needs to have a costume capable of breaking stone blocks, and another costume for maneuvering fast moving platforms.

Once through the mirror, the player will be on a floating island, next to another island with the Super Skater Costume Cube on it. Connecting these islands is a string of floating blocks, which periodically switch between being underneath a cliff side of the island, and being beside the cliff, letting the player walk across them to reach the other island. The player should switch to a different costume that either is capable of moving quickly, or can glide/hover for the periods of time when the blocks are unreachable (underneath the cliff).

Once on the island containing the Costume Cube, there is also a Costume Key, but it's on a piece of land separated from the player by a fast moving block, which has a chance of pushing the player off of the island entirely. It would be best to use a costume that has some sort of hover ability, to be able to bypass the fast moving block completely. 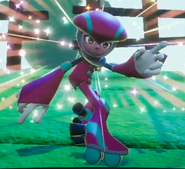 Super Skater as worn by Leo or Emma.