Emit a Tornado Barrier When Jumping

Tornado Wolf is one out of the eighty unique Costumes found in Balan Wonderworld. It appears in Chapter 1.

Some fragile blocks contain Drops making the costume useful for acquiring them. However, since some blocks are also used as platforms to reach higher rewards, it is often wise to use a different costume first to see if the block serves such a purpose before destroying them. Because the Tornado Wolf has to jump on order to spin, it can not destroy blocks it is directly standing on top of.

Tornado Wolf resembles the typical cartoonish depiction of a bipedal wolf with some more unique characteristics, like yellow stripes along its arms, and a prominent under-bite. Majority of its body is brown with darker brown on its torso and arms and fluffy light beige fur accenting its wrists and lower jaw reaching to partially cover its chest.

When worn as a costume, it looks about the same, except the mouth opens as a hole for Emma or Leo's face to show through.

According to the final musical number, this costume is meant to be representative of Jose Gallard, as it is the inhabitant of Chapter 1 seen dancing alongside him. This is further alluded to in the poster for Chapter 1, as it is shown in it alongside Jose.

The costume version of Tornado Wolf is found at the start of Chapter 1, Act 1. There is a Costume Key next to its Costume Cube, so there's little difficulty in obtaining it. 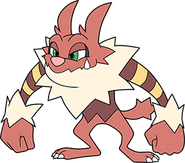 Early screenshot of equipping the costume when it was known as "Whirling Wolf".